The Continuing Kagzi Tradition of India

I am thrilled to report that the article that I researched, blogged and worked hard on over the summer last year, has finally been printed in Hand Papermaking Magazine! You can read the previous blog post here. And you can read the article below! 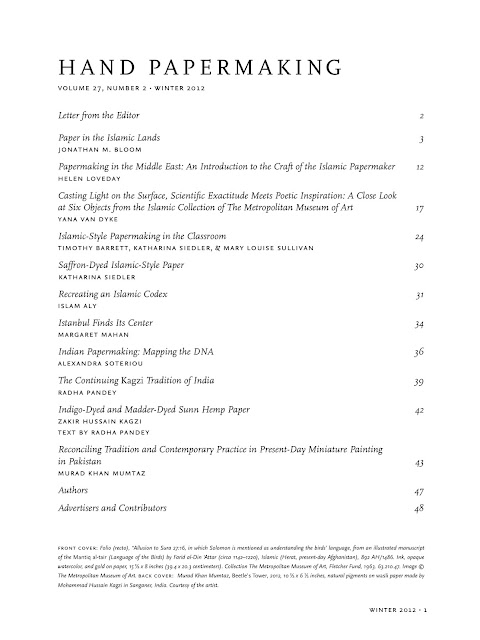 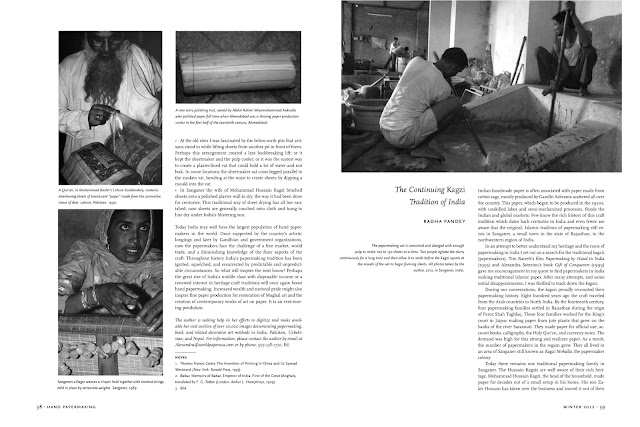 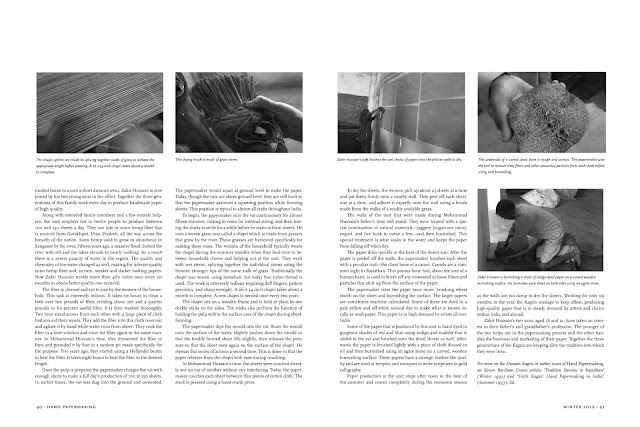 The Continuing Kagzi Tradition of India

Indian handmade paper is often associated with paper made from cotton rags, mostly produced by Gandhi Ashrams scattered all over the country. This paper, which began to be produced in the 1920s, with unskilled labor and semi-mechanized processes, floods the Indian and global markets. Few know the rich history of this craft tradition which dates back centuries in India and even fewer are aware that the original, Islamic tradition of papermaking still exists in Sanganer, a small town in the state of Rajasthan, in the northwestern region of India.

In an attempt to better understand my heritage and the roots of papermaking in India I set out on a search for the traditional kagzis (papermakers). Tim Barrett’s film Papermaking by Hand in India (1995) and Alexandra Soteriou’s book Gift of the Conquerors (1999) gave me encouragement in my quest to find papermakers in India making traditional Islamic paper. After many attempts, and some initial disappointments, I was thrilled to track down the kagzis.

During our conversations, the kagzis proudly recounted their papermaking history. Eight hundred years ago the craft traveled from the Arab countries to North India. By the fourteenth century, four papermaking families settled in Rajasthan during the reign of Feroz Shah Tughlaq. These four families worked for the King’s court in Jaipur making paper from jute plants that grew on the banks of the river Saraswati. They made paper for official use, account books, calligraphy, the Holy Quran, and currency notes. The demand was high for this strong and resilient paper. As a result, the number of papermakers in the region grew. They all lived in an area of Sanganer still known as Kagzi Mohalla, the papermaker colony.

Today there remains one traditional papermaking family in Sanganer. The Hussain Kagzis are well aware of their rich heritage. Mohammad Hussain Kagzi, the head of the household, made paper for decades out of a small setup in his home. His son Zakir Hussain has taken over the business and moved it out of their modest home to a unit a short distance away. Zakir Hussain is now joined by his two young sons in the effort. Together the three generations of this family work every day to produce handmade paper of high quality.

Along with extended family members and a few outside helpers, the unit employs ten to twelve people to produce between 100 and 150 sheets a day. They use jute or sunn hemp fiber that is sourced from Gorakhpur, Uttar Pradesh, all the way across the breadth of the nation. Sunn hemp used to grow in abundance in Sanganer by the river. Fifteen years ago, a massive flood choked the river with silt and the lakes shrunk to nearly nothing. As a result there is a severe paucity of water in the region. The quality and chemistry of the water changed as well, making for inferior-quality sunn hemp fiber and, in turn, weaker and darker looking papers. Now Zakir Hussain travels more than 460 miles once every six months to obtain better-quality raw material.

The fiber is cleaned and cut to size by the women of the household. This task is extremely tedious. It takes six hours to clean a little over two pounds of fiber, yielding about one and a quarter pounds or 60-percent useful fiber. It is then washed thoroughly. Two men stand across from each other with a large piece of cloth tied around their waists. They add the fiber into this cloth reservoir and agitate it by hand while water runs from above. They cook the fiber in a lime solution and rinse the fiber again in the same manner. In Mohammad Hussain’s time, they fermented the fiber in lime and pounded it by foot in a sunken pit made specifically for the purpose. Five years ago, they started using a Hollander beater to beat the fiber. It takes eight hours to beat the fiber to the desired length.

Once the pulp is prepared the papermaker charges the vat with enough slurry to make a full day’s production of 100 to 150 sheets. In earlier times, the vat was dug into the ground and cemented. The papermaker would squat at ground level to make the paper. Today, though the vats are above ground level, they are still built so that the papermaker assumes a squatting position while forming sheets. This position is typical to almost all crafts throughout India.

To begin, the papermaker stirs the vat continuously for almost fifteen minutes, mixing in rosin for internal sizing, and then leaving the slurry to settle for a while before he starts to form sheets. He uses a woven grass mat called a chapri which is made from grasses that grow by the river. These grasses are harvested specifically for making these mats. The women of the household typically weave the chapri during the summer months when they find time in between household chores and helping out at the unit. They work with wet stems, splicing together the individual stems using the thinner, stronger tips of the same stalk of grass. Traditionally the chapri was woven using horsehair, but today fine nylon thread is used. The work is extremely tedious requiring deft fingers, patient precision, and sharp eyesight. A 26 x 34-inch chapri takes about a month to complete. A new chapri is needed once every two years.

The chapri sits on a wooden frame and held in place by two deckle sticks on the sides. The sticks also perform the function of holding the pulp within the surface area of the chapri during sheetforming.

In Mohammad Hussain’s time, the sheets were couched directly one on top of another without any interfacing. Today, the papermaker couches each sheet between thin pieces of cotton cloth. The stack is pressed using a hand-crank press.

To dry the sheets, the women pick up about 25 sheets at a time and pat them firmly onto a nearby wall. They peel off each sheet, one at a time, and adhere it expertly onto the wall using a brush made from the stalks of a readily available grass.

The walls of the unit that were made during Mohammad Hussain’s father’s time still stand. They were treated with a special combination of natural materials—jaggery (sugarcane juice), yogurt, and rice husk to name a few—and then burnished. This special treatment is what soaks in the water and keeps the paper from falling off when dry.

The paper dries quickly in the heat of the desert sun. After the paper is peeled off the walls, the papermaker brushes each sheet with a peculiar tool—the chest bone of a camel. Camels are a common sight in Rajasthan. This porous bone tool, about the size of a human hand, is used to brush off any unwanted or loose fibers and particles that stick up from the surface of the paper.

The papermaker sizes the paper once more, brushing wheat starch on the sheet and burnishing the surface. The larger papers are sometimes machine calendared. Some of these are dyed in a pale yellow and off-white natural dye to make what is known locally as wasli paper. This paper is in high demand by artists all over India.

Some of the paper that is produced by this unit is hand dyed in gorgeous shades of red and blue using indigo and madder that is added to the vat and brushed onto the dried sheets as well. Afterwards the paper is brushed lightly with a piece of cloth doused in oil and then burnished using an agate stone on a curved, wooden burnishing surface. These papers have a strange, leather-like quality and are used at temples and mosques to write scriptures in gold calligraphy.

Paper production at the unit stops after noon in the heat of the summer and ceases completely during the monsoon season as the walls are too damp to dry the sheets. Working for only six months in the year, the Kagzis manage to keep afloat, producing high-quality paper that is in steady demand by artists and clerics within India and abroad.

Zakir Hussain’s two sons, aged 18 and 21, have taken an interest in their father’s and grandfather’s profession. The younger of the two helps out in the papermaking process and the other handles the business and marketing of their paper. Together the three generations of the Kagzis are keeping alive the tradition into which they were born.

Posted by Radha Pandey at 5:41 AM No comments:

Cost : Rs. 2,000
(Materials, tools & refreshments included, but participants are encourages to bring media to decorate the pages of their journal)

Participants will leave with 1 drum-leaf binding. This structure requires no stitching and is perfect for anyone interested in creating a journal to ring in the new year!

Posted by Radha Pandey at 9:10 AM No comments: