Yuri Lochan's work took my breath away, the minute I got her invite in the mail. I cut it up immediately and got it ready for a coptic. It was such great fun and so satisfying to see her work in the form of a book. The inside of the invite had another art-work printed on it. I used it to make an inset on the inside of the front cover.
She loved it when I finally presented it to her on the opening night. She uses gold leafing in her work, and most of her paintings are done in sections, pieced together as a whole. The expressions on all the human forms in her work are mesmerizing. 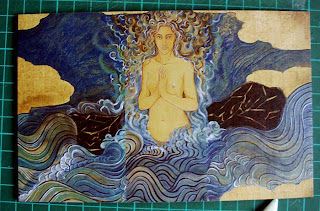 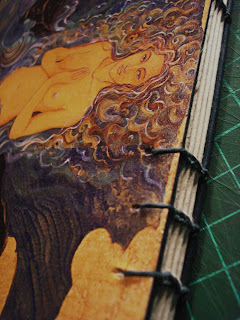 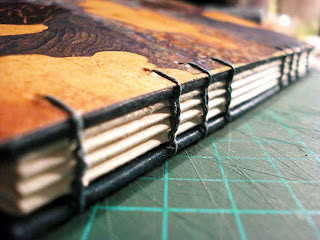 A detail of the spine. 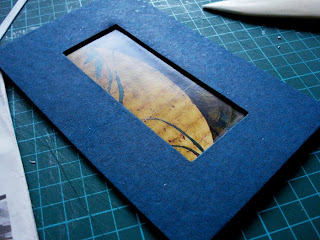 The inset. Front and back covers were covered with Midnight Blue Handmade paper from Tara DA. 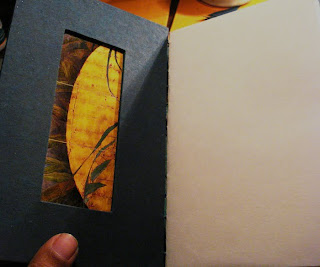 The book, open to the first page.

Posted by Radha Pandey at 2:40 AM No comments:

I was recently asked to make a visitor's book for Veenu Shah's Wabi-Sabi exhibition at the Alliance Francaise de Delhi. It was a beautiful exhibition of her enamels. After having done all the collateral (catalogue, invites, posters and info tags) for the exhibition, the square format book was a pleasure to make. It filled up within three days with comments and orders, and I had to sew on 4 more signatures to the book, to make it last the rest of the week. 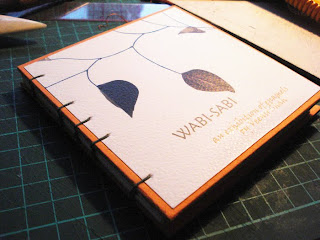 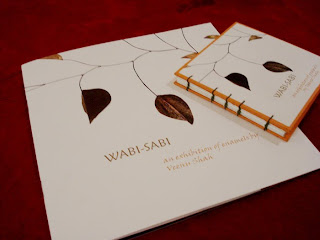 The book and the catalogue.
Posted by Radha Pandey at 2:35 AM No comments:

Here's the presentation, finally. Lots of talking and so there's hardly any text.
This is the link for the Pecha-Kucha Delhi chapter, for anyone interested. http://www.pecha-kucha.org/night/delhi/
The link to the article on this particular Pecha-Kucha can be read here. 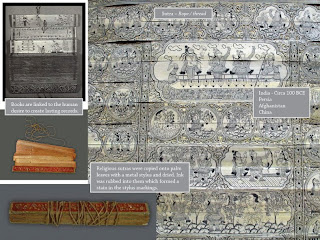 The Sutra (thread)
A book is the potential of anything to fall into a structure and contain information. It can be anything from a box, to leaves, to board, to a can, to cloth.
It is speculated that the book came to be because of humanity's need to create permanent records.
The Sutra is the earliest known form of the bound book. India was where this form was invented around Circa 100 BCE.
This form travelled from India to (then) Persia, Afganistan and China through Buddhism. 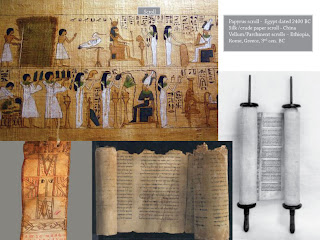 The Sroll
The Egyptians invented Papyrus and the Papyrus scroll in 2400 BC. The chinese had their own version in Silk which they painted on with brushes, the Ethiopians had theirs with parchment/vellum, as did the Roman empire and Greece. 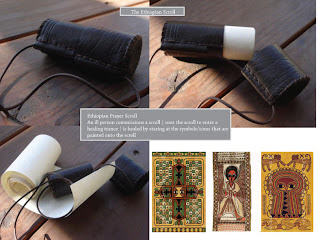 The Ethiopian Scroll
The Ethiopian scroll is a very interesting form. It was made of Vellum or parchment. An ill person would commission a scroll. The cleric would then measure the ill person from beneath his feet to all the way around his head. This length would determine the length of the scroll. It would be filled with iconography and prayers and put in a case that could be slung around the person. The ill person would then, just by staring at the imagery, enter a trance-like state that would then heal him/her. Each 'healing scroll' was unique, in that it was personalized and meant only for the individual it was made for. 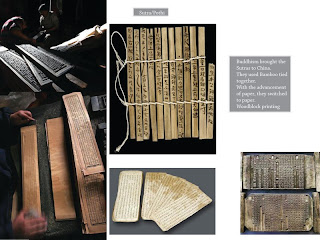 The Sutra/Pothi
The form that the Sutra then took on in China was of the Pothi. They adapted it using the only material widely available at the time - Bamboo. This crude form did not last very long. It was cumbersome and inconvenient. It was later replaced by paper and printed using wooden blocks. Even today, the Sutras in all the buddhist monasteries are printed, and the strips of paper are then placed between two wooden blocks that are then wrapped with cloth. 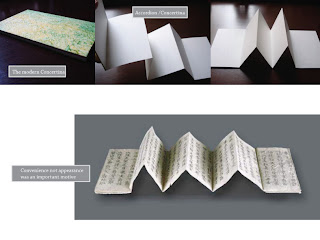 The Concertina/Accordion
Seeing as the sroll was a cumbersome and awkward form - in that it could be crushed, the entire roll had to be opened out for entire text to be read at once etc. - the natural evolution was the introduction of the fold to this form. So the scroll, folded, formed the Concertina or Accordion. The Accordions, when first made, were made based on convenience and not aesthetic. The form evolved over time and today, the folding is done quite carefully, in a scientific and well-thought out manner- making sure each length equals the previous and so on. 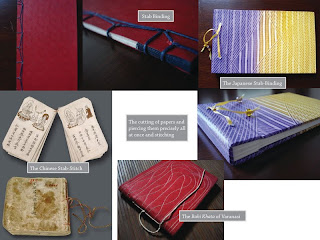 Stab Binding
That brings me to the Stab. Paper was cut, then pierced with precision to and then threaded through to form the Stab bound structure. The Japanese have various version of this binding. The Chinese had their own crude version called the Stab stitch and we have our own version in the Bahi Khata, popularly used in Benaras. 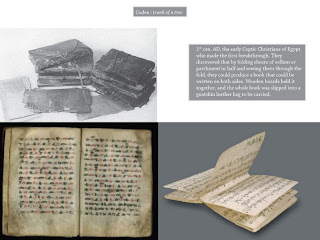 The codex
Which brings me to the codex. In the 1st century AD, the Early Coptic Christians of Egypt, were the first to discover, that by folding Vellum or parchment into half (folio) and placing it inside another folio/s and then threading them through, they could create a book that could be written on, on both sides. They used wooden boards as cover and made a leather slip case for further protection. This was indeed a great leap forward.
Surprisingly, the Arabs were the first ones to make a book out of paper. They used silk to sew it together, making it light and easy to carry. They made it after they learnt the craft of paper-making from the Chinese in the 8th Century. 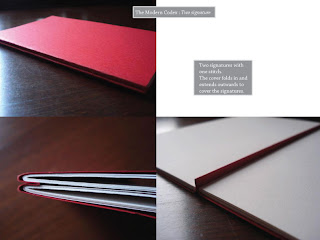 Pamphlet Binding
This is a example of a two section binding, using one stitch. The cover folds in and then out covering the book completely, but leaving an element of surprise as you open the book to discover it peeping through. 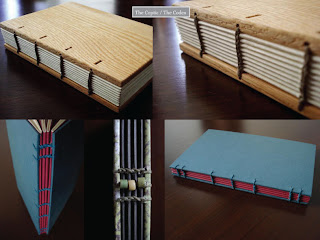 The Codex/Coptic
On top is an example of the Ethiopian codex structure. It has been sewn with two needles and the spine has been further strengthened by using wheat paste. Below is the single-needle link stitch. 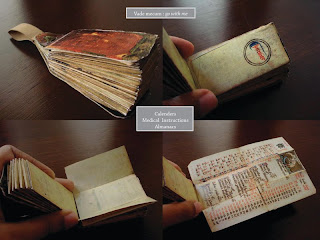 Vade Mecum (go with me)
This is another Ethiopian form. This form is ideal for books of reference, like - calenders, almanacs, medical references. It can contain alot of information on a page that can be folded into a sixth of its size. Priest would use it as a medical reference when healing the sick. They would sling it around their belts and carry it wherever they went. 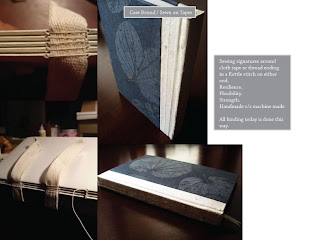 Case Binding
This is how most books that we buy in the stores today are made. Some are still handmade, but most are made using machines. The cloth tapes/strips are what holds the book-block to the cover. The sections are sewn around the tapes, holding them in place. 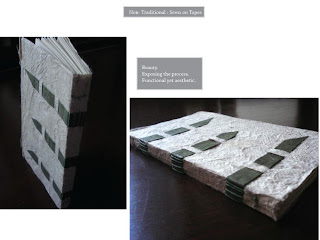 Sewn-on-Tapes
This structure is similar to the Case Bound, in that it is sewn on tapes. The book pictures above has been sewn on paper tapes. The cover is made from handmade Kozo and the tapes are then woven through the cover. This binding is playful, aesthetic and beautiful. 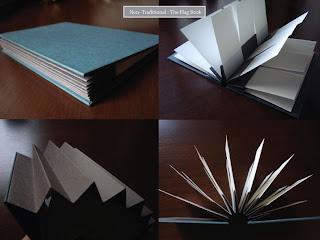 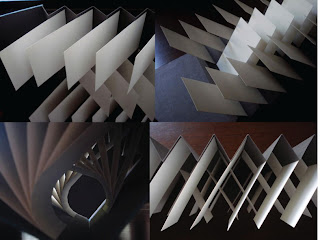 The Flag Book
This structure is made using the Accordion form for the spine. Strips of paper are pasted in equal intervals to form the Flags of this book. It is dynamic in its form, and is always a fun surprise depending on the way it is opened or handled. Different people have thought of different uses for this book. Stories, textile swatches, flip book, character sketches, colour palettes and more. 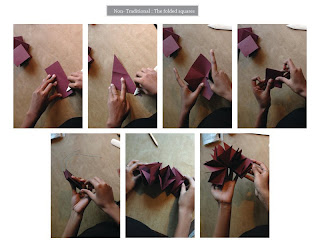 Star Book
This structure is playful and small. There are various ways this structure can differ in its opening depending on the folding and the glueing. Each fold hides and reveals, but eventually opens out completely into a square. Each folded square is proportionally half the size of the open square. 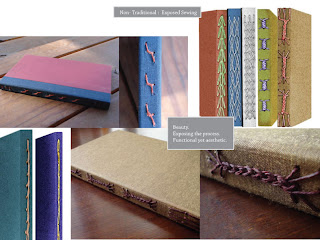 Exposed Sewings
Another structure is the Exposed Sewing. For me, what takes the longest, apart from the actual sewing, is making the template. Making the jig to pierce the sections, the number of needles, the placing of the pattern. The end result is extremely satisfying. Pictured above as some books by Keith Smith. 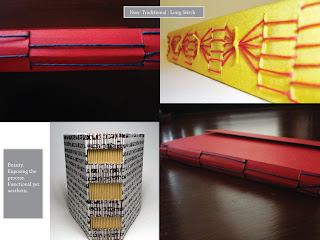 Long Stitch
The long stitch is a simpler version of what is pictured above; although they can be highly complex. They have hundreds of variations. 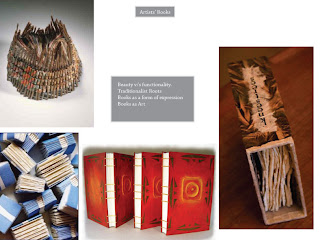 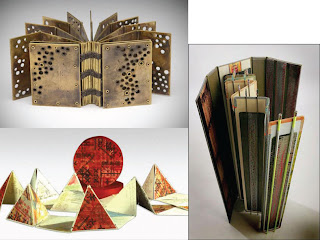 Artists' Books
Taking books out of the realm of absolute functionality and into that of Art, are Artists' books. As far as I have observed they have traditionalist roots, but are bold and different in their final form, execution, aesthetic and content. Pictures above are Daniel Kelm's works, A book made by a number of Artist's, one of them being Catherine Nash, and others.
Posted by Radha Pandey at 4:44 AM 1 comment: 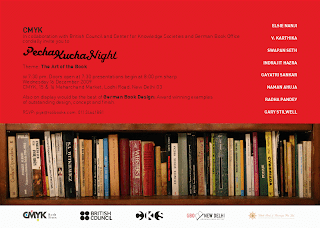 I have been asked to participate in the Pecha-Kucha Night at CMYK on the 16th of December at 7.30 pm.
Try and make it if you can!

>> To read an article about this Pecha-Kucha check out - http://www.livemint.com/articles/2010/01/15211823/The-KISS-principle.html
Here's a short explanation of the concept -
Pecha-Kucha is a specific format for presentation -- 20 slides for 20 seconds each -- resulting in a superfast, superengaging and superfun kind of experience for both presenter and audience. Pecha-Kucha was born in Tokyo, in the nightclub SuperDeluxe run by the architects Klein and Dytham. Since then, it has spread all around the world, to hundreds of cities where thousands of creative practitioners have used it to share their work and connect with each other.

Pecha-Kucha, in Japanese, means 'Chitter-Chatter' or 'Khus-Phus' or 'Bak-Bak' -- it can be translated and paraphrased as 'the rustle of conversation.' The point is not to exalt speakers, or to ask critical questions as in a press conference, but to stimulate conversations between artists and design practitioners from different fields. So presentations are lightning fast, one after another, and then the bar opens! 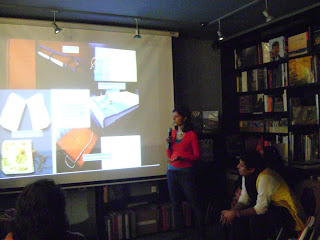 Here's a picture - taken by someone at CMYK. The place was overflowing with people. I was SO nervous and the slides were moving so fast! But it was fun by the end of it. Met a few good people and will hopefully get some fun stuff to work on.
Will upload more pictures when and if I find them.
Check back for the presentation.
Posted by Radha Pandey at 10:58 AM No comments: